From the looks of it, 2018 is going to be a great year for readers. To help stock your library’s shelves for the coming year, we’ve compiled a list of highly-anticipated books and when they’ll be released.

With captivating insight and heart, Carnegie’s Maid tells the story of one brilliant woman who may have spurred Andrew Carnegie’s transformation from ruthless industrialist into the world’s first true philanthropist.

BRAVE is McGowan’s raw, honest, and poignant memoir/manifesto—a no-holds-barred, pull-no-punches account of the rise of a millennial icon, fearless activist, and unstoppable force for change who is determined to expose the truth about the entertainment industry, dismantle the concept of fame, shine a light on a multibillion-dollar business built on systemic misogyny, and empower people everywhere to wake up and be BRAVE.

From the sensational #1 New York Times bestselling author Jojo Moyes, a new book featuring her iconic heroine of Me Before You and After You, Louisa Clark.

From Zadie Smith, one of the most beloved authors of her generation, a new collection of essays.

The Great Alone is a daring, beautiful, stay-up-all-night story about love and loss, the fight for survival, and the wildness that lives in both man and nature.

A witty and emotionally charged novel that delves into the heart of a marriage, and how those we love and think we know best can sometimes surprise us the most—from #1 New York Times bestselling author Sophie Kinsella.

New York Times bestselling author Laura Lippman returns with a superb novel of psychological suspense about a pair of lovers with the best intentions and the worst luck: two people locked in a passionate yet uncompromising game of cat and mouse. But instead of rules, this game has dark secrets, forbidden desires, inevitable betrayals—and cold-blooded murder.

In this riveting, heartfelt debut, a young woman assumes a new name to escape her dark past and find the redemption she desperately seeks.

The only writer in history to win consecutive Edgar Awards for Best Novel, New York Times bestselling author John Hart returns to the world of his most beloved novel, The Last Child.

In the long-anticipated novel from the author of the critically acclaimed Beasts of No Nation, a revelation shared between two privileged teenagers from very different backgrounds sets off a chain of events with devastating consequences.

From the New York Times bestselling author of The Guest Room, a powerful story about the ways an entire life can change in one night: A flight attendant wakes up in the wrong hotel, in the wrong bed, with a dead man – and no idea what happened. 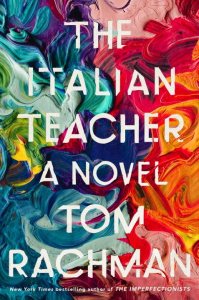 A masterful novel about the son of a great painter striving to create his own legacy, by the bestselling author of The Imperfectionists.

A New York Times columnist and one of America’s leading conservative thinkers considers Pope Francis’s efforts to change the church he governs.

From the New York Times-bestselling author of The Interestings, an electric, multilayered novel about ambition, power, friendship, and mentorship, and the romantic ideals we all follow deep into adulthood, not just about who we want to be with, but who we want to be.

A dazzling collection of short stories from the New York Times bestselling author of Prep, American Wife, and Eligible.

Kick off the New Year with a boost in ebook circulation. Use our free marketing materials to get patrons reading!

All book descriptions are courtesy of Title Source 360 and our publishing partners.